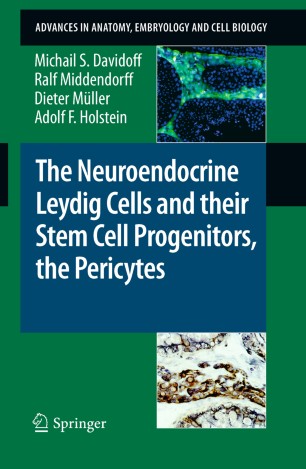 The Neuroendocrine Leydig Cells and their Stem Cell Progenitors, the Pericytes

The Leydig cells of the testis represent the main source of androgens. The idea of Leydig cells as endocrine cells has been the leading characteristic of this interesting cell population till now. Our studies of the last 2 decades allowed us to reveal a new important feature of Leydig cells that is their obvious similarity with structures of the central and peripheral nervous system. This includes the expression of neurohormones, neurotransmitters, neuropeptides and glial cell antigens. In this way, it became evident that in addition to the well established control by steroids and systemic hormones, important local auto- and paracrine control mechanisms of testicular functions exist.

Thus, the Leydig cells represent a specialized cell population with both endocrine and neuroendocrine properties. The discovery of the neuroendocrine features of Leydig cells gave rise to the hypothesis of a potential neuroectodermal and/or neural crest origin of testicular Leydig cells. In an experimental animal model we revealed that adult Leydig cells originate by transdifferentiation from stem/progenitor cells (pericytes and smooth muscle cells), underlying the close relationship of Leydig cells with testis microvasculature. This and the supporting data from the literature provided the basis for revealing the pericytes as a common adult stem cell type of mammalian species. Distributed by the microvasculature through the entire body, the pericyte, acting as a resting early pluripotent adult stem cell, provides an ingenious system to assure the maintenance, physiological repair and regeneration of organs, each under the influence of specific local environmental factors.