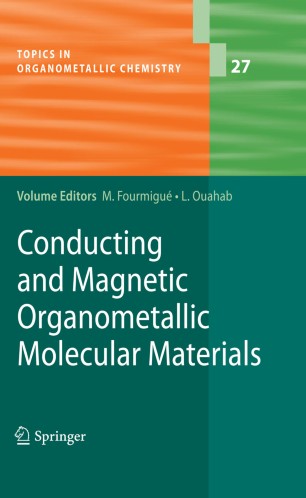 For several years, the two parallel worlds of Molecular Conductors in one hand and Molecular Magnetism in the other have grown side by side, the former essentially based on radical organic molecules, the latter essentially based on the high spin properties of metal complexes. Over the last few years however, organometallic derivatives have started to play an increasingly important role in both worlds, and have in many ways contributed to open several passages between these two worlds. This volume recognizes this important emerging evolution of both research areas. It is not intended to give a comprehensive view of all possible organometallic materials, and polymers for example were not considered here. Rather we present a selection of the most recent research topics where organometallic derivatives were shown to play a crucial role in the setting of conducting and/or magnetic properties in crystalline materials. First, the role of organometallic anions in tet- thiafulvalenium-based molecular conductors is highlighted by Schlueter, while Kubo and Kato describe very recent ortho-metalated chelating ligands appended to the TTF core and their conducting salts. The combination of conducting and magnetic properties and the search for p–d interactions are analyzed in two comp- mentary contributions by Myazaki and Ouahab, while Valade focuses on the only class of metal bis(dithiolene) complexes to give rise to superconductive molecular materials, in association with organic as well as organometallic cations.