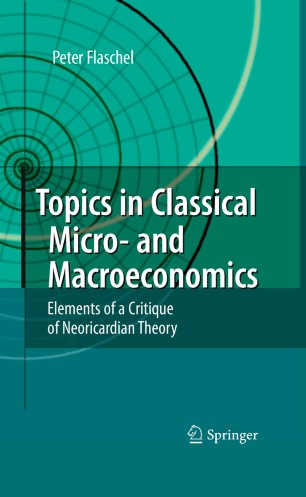 Topics in Classical Micro- and Macroeconomics

Elements of a Critique of Neoricardian Theory

This book on Classical micro- and macroeconomics collects revised versions of papers which were written between 1983 and 2000, some jointly with coauthors, and it supplements them in a coherent way with recent unpublished work on the issues raised and treated in them. It attempts to demonstrate to the reader that themes of Classical economics, in particular in the tradition of Smith, Ricardo and Marx, can be synthesized into a coherent whole from the perspective of formal model building as well as applied Leontief-Stone Systems of National Accounts and the Input-Output approaches built on them. This reformulation of Classical economics differs significantly from the static Neoricardian formalization of the Classical approach to economics.

In these days when the properly working of the market has become controversial, it is worth going back to classical economics and to study of how the classical dynamic mechanisms, for example the invisible hand in the sense of Adam Smith, were supposed to work to bring about stability, equilibrium and welfare. Having written many books and research papers on the dynamics of market economies, Peter Flaschel very competently takes on this issue in this current monograph. This book will definitely play an important role of reviving classical micro- and macroeconomic dynamics.
Willi Semmler, New School University, New York

This book is a must-read. It provides a comprehensive, original analysis of classical theories of prices, values, and distribution, which combines the utmost theoretical and mathematical rigour with a significant empirical orientation. Indeed, it outlines the foundations of an alternative analysis of capitalist economies and it is likely to become a classic for all scholars dissatisfied with standard approaches. Yet any open-minded economist would find that the arguments provided have the rare quality of challenging a number of long-held beliefs.
Roberto Veneziani, Queen Mary University of London