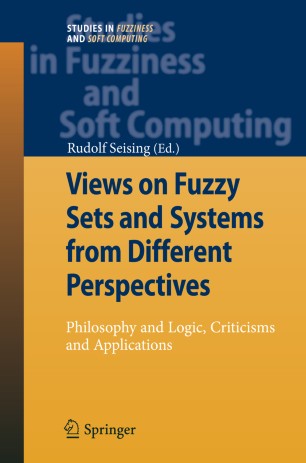 Views on Fuzzy Sets and Systems from Different Perspectives

Philosophy and Logic, Criticisms and Applications

Part of the Studies in Fuzziness and Soft Computing book series (STUDFUZZ, volume 243)

For more than four decades of its existence, the scientific "Fuzzy Group" has grown from a few engineers, working either alone or in small groups to a large scientific community. From the perspective of the history of science, it is quite normal over the course of time for such research programs to adapt themselves to the phenomena of branching out and differentiation into special projects and penetrating other disciplines. This applies not only to the distribution of research projects, the number of researchers, and the benefits of various research funding programs but also in the high profile of the subject in widely diverse fields of science, technology and business.

For more than forty years fuzzy logic and fuzzy mathematics have been continuously developed, resulting in important theoretical expansions of this mathematical theory of unsharp amounts or logic of unsharp statements, which have often very quickly led to new application systems. At the same time, the areas of artificial neural networks and of evolutionary and genetic algorithms emerged as independent research disciplines and beginning in the 1980s new developments arose that were hardly foreseeable: the theory of fuzzy sets and systems was combined with these new scientific theories and methods and the use of "hybrid systems" became more and more common in all types of applications.

In our new century, the theory of fuzzy sets and systems is in the core of "Soft Computing" and "Computational Intelligence" and has become a normal scientific theory in the fields of exact sciences and engineering and it is well on its way to becoming normal in the soft sciences as well. This book is a collection of the views of numerous scholars in different parts of the world who are involved in various research projects concerning fuzziness in science, technology, economic systems, social sciences, logics and philosophy. This volume demonstrates that there are many different views of the theory of fuzzy sets and systems and of their interpretation and applications in diverse areas of our cultural and social life.