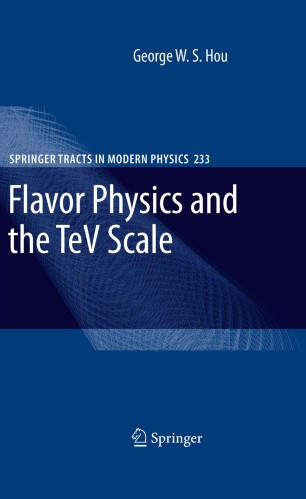 Flavor Physics and the TeV Scale

This monograph treats the effectiveness of useing flavor physics in offering probes of the TeV scale, while providing a timely interface during the emerging LHC era. By concentrating only with the TeV-scale connection, a large part of the B factory output can be bypassed, and emphasis is placed on loop-induced processes, i.e. virtual, quantum processes that probe TeV-scale physics. The experimental perspective is taken, resulting in selecting processes, rather than the theories or models, as the basis to exploration. Two-thirds of the book is therefore concerned with b -> s or bs <-> sb transitions. The guiding principle is: unless it can be identified as the smoking gun, it is better to stick to the simplest, rather than elaborate, explanation of an effect that may call for New Physics. By focusing on heavy flavor as a probe of TeV-scale physics, technicalities can be employed to unveil their beauty, without getting ensnared in them, while aiming for the deeper, higher-scale physics that such probes provide.

This tract originated from a plenary talk at the SUSY 2007 conference in Karlsruhe, Germany.