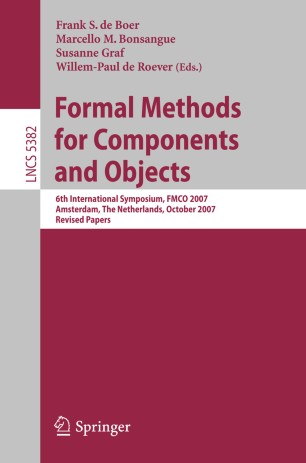 Formal methods have been applied successfully to the verification of medium-sized programs in protocol and hardware design. However, their application to the development of large systems requires more emphasis on specification, modelling and validation techniques supporting the concepts of reusability and modifiability, and their implementation in new extensions of existing programming languages like Java.

The 6th International Symposium on Formal Methods for Components and Objects, FMCO 2007, was held in Amsterdam, The Netherlands, in October 2007. This book presents 12 revised papers submitted after the symposium by the speakers of each of the following European IST projects: the IST-FP6 project Mobius, developing the technology for establishing trust and security for the next generation of global computers; the IST-FP6 project SelfMan on self management for large-scale distributed systems based on structured overlay networks and components; the IST-FP6 project GridComp and the FP6 CoreGRID Network of Excellence on grid programming with components; the Real-time component cluster of the Network of Excellence on Embedded System Design ARTIST, focussing on design processes, and architectures for real-time embedded systems; and the IST-FP6 project CREDO on modeling and analysis of evolutionary structures for distributed services.