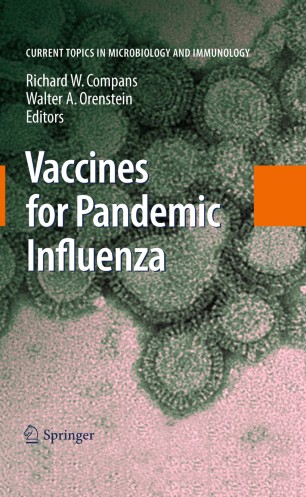 Recent years have seen unprecedented outbreaks of avian influenza A viruses. In particular, highly pathogenic H5N1 viruses have not only resulted in widespread outbreaks in domestic poultry, but have been transmitted to humans resulting in numerous fatalities. The rapid expansion in their geographic distribution and the possibility that these viruses could acquire the ability to spread from person to person raise the risk that such a virus could cause a global pandemic with high morbidity and mortality. An effective influenza vaccine represents the best approach to prevent and control such an emerging pandemic. However, current influenza vaccines are directed at existing seasonal influenza viruses, which have limited antigenic relationships to the highly pathogenic H5N1 strains. Concerns about pandemic preparedness have greatly stimulated research activities to develop effective vaccines for pandemic influenza viruses, and to overcome the limitations inherent in current approaches to vaccine production and distribution. These limitations include the use of embryonated chicken eggs as the substrate for vaccine production; which is time-consuming and could involve potential biohazards in growth of new virus strains. Other limitations include the requirement that the current inactivated influenza vaccines be administered using needles and syringes, requiring trained personnel, which could be a bottleneck when attempting to vaccinate large populations in mass campaigns. In addition, the current inactivated vaccines which are delivered by injection elicit limited protective immunity in the upper respiratory tract where the infection process is initiated. Most of these limitations of the current vaccines are being addressed by research on novel approaches to vaccine development and delivery that are described in many of the chapters in this volume.