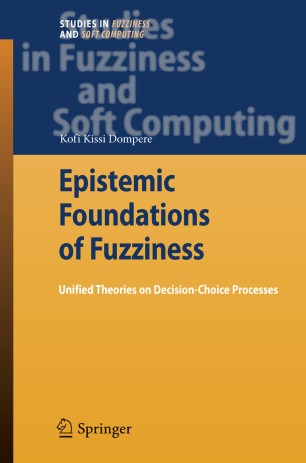 Part of the Studies in Fuzziness and Soft Computing book series (STUDFUZZ, volume 236)

This monograph is a treatment on optimal fuzzy rationality as an enveloping of decision-choice rationalities where limited information, vagueness, ambiguities and inexactness are essential characteristics of our knowledge structure and reasoning processes. The volume is devoted to a unified system of epistemic models and theories of decision-choice behavior under total uncertainties composed of fuzzy and stochastic types. The unified epistemic analysis of decision-choice models and theories begins with the question of how best to integrate vagueness, ambiguities, limited information, subjectivity and approximation into the decision-choice process. The answer to the question leads to the shifting of the classical paradigm of reasoning to fuzzy paradigm. This is followed by discussions and establishment of the epistemic foundations of fuzzy mathematics where the nature and role of information and knowledge are explicated and represented.

The epistemic foundation allows total uncertainties that constrain decision-choice activities, knowledge enterprise, logic and mathematical structures as our cognitive instruments to be discussed in reference to the phenomena of fuzzification, defuzzification and fuzzy logic. The discussions on these phenomena lead us to analyze and present models and theories on decision-choice rationality and the needed mathematics for problem formulation, reasoning and computations. The epistemic structures of two number systems made up of classical numbers and fuzzy numbers are discussed in relation to their differences, similarities and relative relevance to decision-choice rationality. The properties of the two number systems lead to the epistemic analysis of two mathematical systems that allow the partition of the mathematical space in support of decision-choice space of knowledge and non-knowledge production into four cognitively separate but interdependent cohorts whose properties are analyzed by the methods and techniques of category theory. The four cohorts are identified as non-fuzzy and non-stochastic, non-fuzzy and stochastic both of which belong to the classical paradigm and classical mathematical space; and fuzzy and non-stochastic, and fuzzy and stochastic cohorts both of which belong to the fuzzy paradigm and fuzzy mathematical space. The differences in the epistemic foundations of the two mathematical systems are discussed. The discussion leads to the establishment of the need for fuzzy mathematics and computing as a new system of reasoning in both exact and inexact sciences.

The volume is concluded with epistemic discussions on the nature of contradictions and paradoxes viewed as logical decision-choice problems in the classical paradigm, and how these contradictions and paradoxes may be resolved through fuzzy paradigm and the methods and techniques of optimal fuzzy decision-choice rationality. The logical problem of sorites paradox with its resolution is given as an example. Interested audience includes those working in the areas of economies, decision-choice theories, philosophy of sciences, epistemology, mathematics, computer science, engineering, cognitive psychology, fuzzy mathematics and mathematics of fuzzy-stochastic processes.