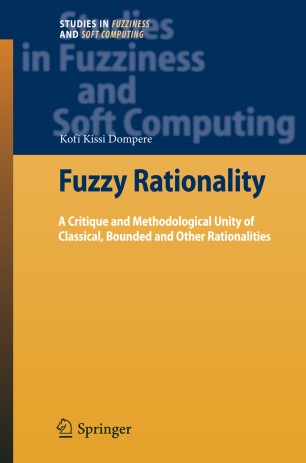 A Critique and Methodological Unity of Classical, Bounded and Other Rationalities

Part of the Studies in Fuzziness and Soft Computing book series (STUDFUZZ, volume 235)

This monograph is special in its orientation. It is first of its kind devoted to bringing to the general scientific community, the epistemic foundation of fuzzy paradigm composed of its logic and mathematics of reasoning. It is first of a sequence of treaties on fuzzy decision-choice rationality. The monograph presents the structure of general rationality and points of entry of classical, bounded and related rationalities. Fuzzy decision-choice rationality is then introduced as a critique and methodological unity of classical and bounded rationalities.

The critique and methodological unity begin with general epistemics of science and the role that rationality plays in knowledge production leading to a view of theory of knowledge as well as an approach to knowledge representation in support of decision-choice processes. The epistemics of science and knowledge production take us to a critical examination of relative meanings and representations of information and knowledge to create an information-knowledge structure and how such structure affects and helps to define decision-choice rationality. It is argued that all types of postulated rationality are subsumed under the optimal fuzzy rationality as a logical envelope. In so doing, a discussion is made to clarify the differences and similarities between decision and choice, and how they relate to ontological and epistemological problems of rationality, human intelligence and decision-choice processes.

The monograph is concluded with discussions on ideology and its effects on information-knowledge construct reasoning and decision-choice rationality in both scientific and non-scientific theories. Ideology is viewed as protective belt of society and its accepted mode of reasoning. The structure of revolution in ideology is then related to Kuhn’s paradigm, Lakatos’ research program, Popper’s cluster of theories and Kadrov’s research framework. It is then argued that optimal fuzzy rationality presents a complete unified cover over the optimal decision-choice rationality of classical, bounded and other rationalities with an important discussion on cost-benefit balances of ideology in social decision-choice space in which humans operate. The focus of the book is on rationality and knowledge production in fuzzy and non-fuzzy processes that constitute epistemic unity in theory of knowledge. The book will be of interest to those working in the areas of economies, decision-choice theories, philosophy of sciences, epistemology, mathematics, computer science, engineering, cognitive psychology, fuzzy mathematics, mathematics of fuzzy-stochastic processes and phenomena of vagueness and ambiguity.