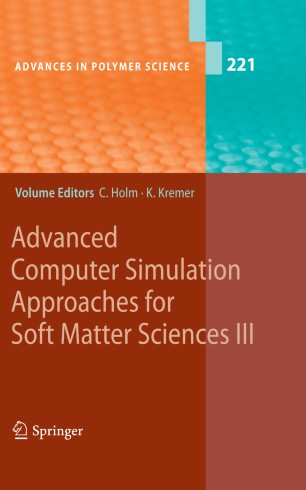 “Soft matter” is nowadays used to describe an increasingly important class of - terials that encompasses polymers, liquid crystals, molecular assemblies building hierarchical structures, organic-inorganic hybrids, and the whole area of colloidal science. Common to all is that ?uctuations, and thus the thermal energy k T and B entropy, play an important role. “Soft” then means that these materials are in a state of matter that is neither a simple liquid nor a hard solid of the type studied in hard condensed matter, hence sometimes many types of soft matter are also named “c- plex ?uids. ” Soft matter, either of synthetic or biological origin, has been a subject of physical and chemical research since the early ?nding of Staudinger that long chain mo- cules exist. From then on, synthetic chemistry as well as physical characterization underwent an enormous development. One of the outcomes is the abundant pr- ence of polymeric materials in our everyday life. Nowadays, methods developed for synthetic polymers are being more and more applied to biological soft matter. The link between modern biophysics and soft matter physics is quite close in many respects. This also means that the focus of research has moved from simple - mopolymers to more complex structures, such as branched objects, heteropolymers (random copolymers, proteins), polyelectrolytes, amphiphiles and so on.