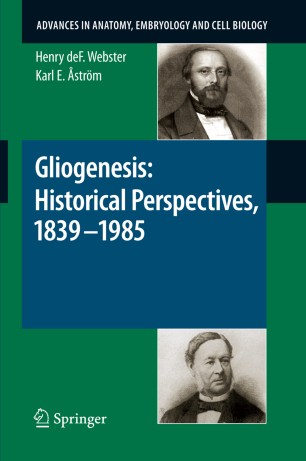 This historical review of gliogenesis begins with the introduction of the cell doctrine by Theodor Schwann in 1839. A number of investigators then showed that tissues and organs were made up of cells. However, when Virchow examined the CNS, what separated nerve cells from each other and from blood vessels appeared to be an unstructured ground substance. He called this binding material "glia" (for glue) and thought it was related to connective tissue. Deiters, a pupil of Virchow, discovered that this ground substance was composed of cells, which he described and illustrated. Subsequent improvements in microscope lenses and the introduction of metallic impregnation methods finally permitted the visualization of glial cells and their processes in toto. Light microscopic studies led to the discovery of different types of glial cellsastroglia, oligodendroglia, microglia, ependymal cells in the CNS, and Schwann cells in the PNS. Subsequent observations characterized the origin and development of each type of glial cell. In the 1950s a new era began with the introduction of electron microscopy, tissue culture, and immunocytochemistry. Other techniques and models were developed and exploited in order to better understand the origins of glia and how they multiply, migrate, and differentiate. In this review, morphology is emphasized. Findings related to cytodifferentiation and the cellular interactions, functions, and regulation of developing glia have also been included.