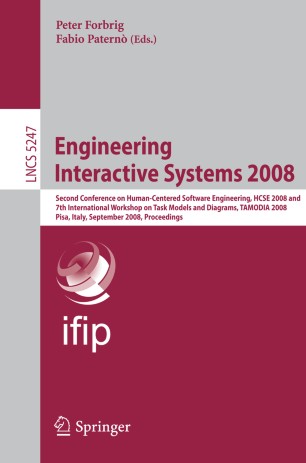 This book constitutes the combined proceedings of the second working conference on Human-Centred Software Engineering (HCSE 2008) and the 6th International Workshop on TAsk MOdels and DIAgrams (TAMODIA 2008); jointly held as EIS 2008, the international event on Engineering Interactive Systems, in Pisa, Italy, in September 2008.

The 3 revised full and 11 revised short papers of HCSE 2008 and 7 revised long and 5 revised short papers of TAMODIA 2008 presented together with a keynote paper and 3 demonstration papers were carefully reviewed and selected from numerous submissions for inclusion in the book. HCSE 2008 addresses the scientific foundations of user interface design, examining the relationship between software engineering and human-computer interaction and user-centred design as an essential part of software engineering process. TAMODIA 2008 is an international workshop on models, such as task models and visual representations in Human-Computer Interaction and focuses on notations used to describe user tasks ranging from textual and graphical forms to interactive, multimodal and multimedia tools.