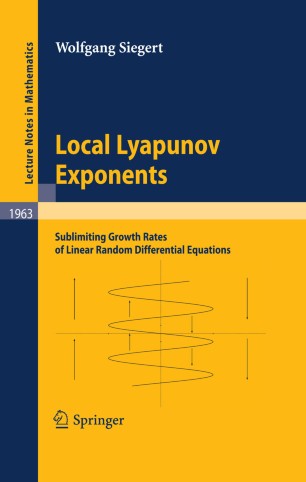 Establishing a new concept of local Lyapunov exponents the author brings together two separate theories, namely Lyapunov exponents and the theory of large deviations.
Specifically, a linear differential system is considered which is controlled by a stochastic process that during a suitable noise-intensity-dependent time is trapped near one of its so-called metastable states. The local Lyapunov exponent is then introduced as the exponential growth rate of the linear system on this time scale. Unlike classical Lyapunov exponents, which involve a limit as time increases to infinity in a fixed system, here the system itself changes as the noise intensity converges, too.

“These lecture notes originate from the author's dissertation and provide a self-contained introduction to the notion of local Lyapunov exponents. … provide a beautiful exposition to this partially subtle subject for readers acquainted with the theory of stochastic differential equations. … Great qualities of this book are also the ample bibliography giving a representative state of the large literature in this field and the great amount of instructively worked out examples. … The composition of the text is throughout clear, carefully thought through and harmonic.” (Michael Högele, Zentralblatt MATH, Vol. 1178, 2010)
Buy options