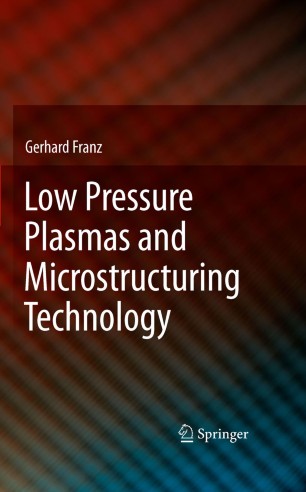 This monograph presents an up to date perspective of gas discharge physics and its applications to various industries. It starts from a comprehensive overview of the different types to generate plasmas by DC discharges, capacitive and inductive radiofrequency coupling, helicon waves including electron cyclotron resonance, and ion beams. To compare these theories with inert plasmas, a fundamental description of plasma diagnostics is presented on the basis of four prominent methods and extended to reactive plasmas.The second part extensively deals with the interaction of these plasmas with surfaces in order to coat or to etch them with reactive gases. Main topics are sputtering, plasma-enhanced chemical vapor deposition, and reactive ion etching. The difficulties which had to be overcome to reach the next technological node in the semiconductor map are documented by a long row of microfeatures. These processes and corresponding microscopic mechanisms are discussed in the final section of this part. In the concluding third part, various fundamental derivations are minutely extended which are required for a deep understanding of the plasma processes.

In retrospect, the semiconductor industry has triggered the development of new methods to excite plasmas. But it was now the industrial part to operate these plasmas with reactive gases. As a result of this combined effort, surface modifications with plasmas are now in widespread use even in low-cost applications due to its easy and convenient implantation as well as its favorable environmental impact.