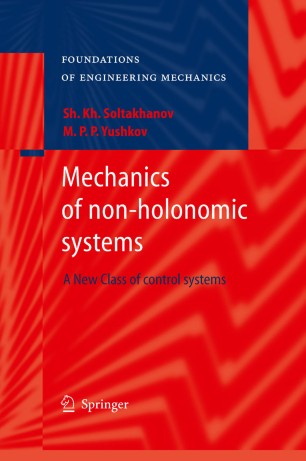 A New Class of control systems

A general approach to the derivation of equations of motion of as holonomic, as nonholonomic systems with the constraints of any order is suggested. The system of equations of motion in the generalized coordinates is regarded as a one vector relation, represented in a space tangential to a manifold of all possible positions of system at given instant. The tangential space is partitioned by the equations of constraints into two orthogonal subspaces. In one of them for the constraints up to the second order, the motion low is given by the equations of constraints and in the other one for ideal constraints, it is described by the vector equation without reactions of connections. In the whole space the motion low involves Lagrangian multipliers. It is shown that for the holonomic and nonholonomic constraints up to the second order, these multipliers can be found as the function of time, positions of system, and its velocities. The application of Lagrangian multipliers for holonomic systems permits us to construct a new method for determining the eigenfrequencies and eigenforms of oscillations of elastic systems and also to suggest a special form of equations for describing the system of motion of rigid bodies. The nonholonomic constraints, the order of which is greater than two, are regarded as programming constraints such that their validity is provided due to the existence of generalized control forces, which are determined as the functions of time. The closed system of differential equations, which makes it possible to find as these control forces, as the generalized Lagrange coordinates, is compound. The theory suggested is illustrated by the examples of a spacecraft motion. The book is primarily addressed to specialists in analytic mechanics.

“‘This monograph can be useful for English scientists. It will help them to get acquainted with a rather great number of works by Russian scientists.’ … the book gives an exhaustive account of many theoretical results and applications on non-holonomic mechanics, which often had little circulation in the literature; in this respect, the historical overview of the subject, with an emphasis on the contribution by the Russian school, is interesting. … Many applications are discussed in detail using different approaches … .” (Carlo Morosi, Mathematical Reviews, Issue 2011 j)
Buy options