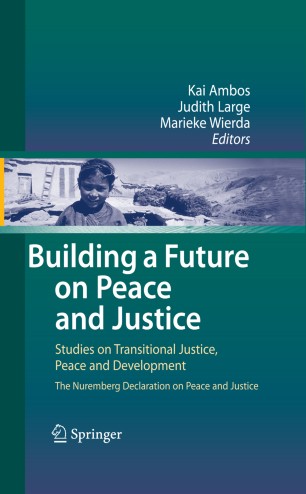 Building a Future on Peace and Justice

Studies on Transitional Justice, Peace and Development The Nuremberg Declaration on Peace and Justice

Results of the 2007 Nuremberg Conference on Peace and Justice: Tensions between peace and justice have long been debated by scholars, practitioners and agencies including the United Nations, and both theory and policy must be refined for very practical application in situations emerging from violent conflict or political repression. Specific contexts demand concrete decisions and approaches aimed at redress of grievance and creation of conditions of social justice for a non-violent future. There has been definitive progress in a world in which blanket amnesties were granted at times with little hesitation. There is a growing understanding that accountability has pragmatic as well as principled arguments in its favour. Practical arguments as much as shifts in the norms have created a situation in which the choice is increasingly seen as "which forms of accountability" rather than a stark choice between peace and justice. It is socio-political transformation, not just an end to violence, that is needed to build sustainable peace. This book addresses these dilemmas through a thorough overview of the current state of legal obligations; discussion of the need for a holistic approach including development; analysis of the implications of the coming into force of the ICC; and a series of "hard" case studies on internationalized and local approaches devised to navigate the tensions between peace and justice.