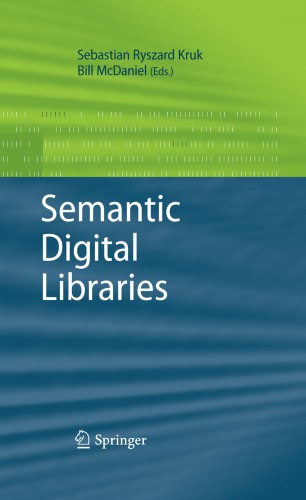 Libraries have always been an inspiration for the standards and technologies developed by semantic web activities. However, except for the Dublin Core specification, semantic web and social networking technologies have not been widely adopted and further developed by major digital library initiatives and projects. Yet semantic technologies offer a new level of flexibility, interoperability, and relationships for digital repositories.

Kruk and McDaniel present semantic web-related aspects of current digital library activities, and introduce their functionality; they show examples ranging from general architectural descriptions to detailed usages of specific ontologies, and thus stimulate the awareness of researchers, engineers, and potential users of those technologies. Their presentation is completed by chapters on existing prototype systems such as JeromeDL, BRICKS, and Greenstone, as well as a look into the possible future of semantic digital libraries.

This book is aimed at researchers and graduate students in areas like digital libraries, the semantic web, social networks, and information retrieval. This audience will benefit from detailed descriptions of both today’s possibilities and also the shortcomings of applying semantic web technologies to large digital repositories of often unstructured data.