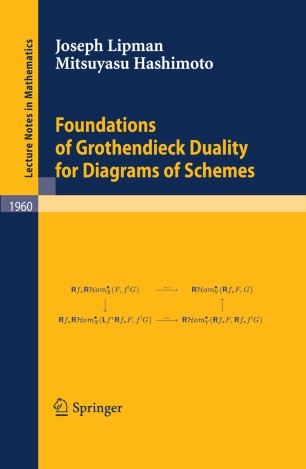 Foundations of Grothendieck Duality for Diagrams of Schemes

The first part written by Joseph Lipman, accessible to mid-level graduate students, is a full exposition of the abstract foundations of Grothendieck duality theory for schemes (twisted inverse image, tor-independent base change,...), in part without noetherian hypotheses, and with some refinements for maps of finite tor-dimension. The ground is prepared by a lengthy treatment of the rich formalism of relations among the derived functors, for unbounded complexes over ringed spaces, of the sheaf functors tensor, hom, direct and inverse image. Included are enhancements, for quasi-compact quasi-separated schemes, of classical results such as the projection and Künneth isomorphisms.

In the second part, written independently by Mitsuyasu Hashimoto, the theory is extended to the context of diagrams of schemes. This includes, as a special case, an equivariant theory for schemes with group actions. In particular, after various basic operations on sheaves such as (derived) direct images and inverse images are set up, Grothendieck duality and flat base change for diagrams of schemes are proved. Also, dualizing complexes are studied in this context. As an application to group actions, we generalize Watanabe's theorem on the Gorenstein property of invariant subrings.

From the reviews: “The appearance of a well-planned, detailed and up-to-date exposition of a topic in abstract algebraic geometry is good news, and the book by J. Lipman and M. Hashimoto definitely has all the above qualities. … get the book in its current state now than to wait for years until the authors produce a more unified presentation. To conclude, the book by Joseph Lipman and Mitsuyasu Hashimoto is an important contribution to an important task of explaining the main ideas of abstract algebraic geometry … .” (George Shabat, Bulletin of the London Mathematical Society, March, 2010)
Buy options