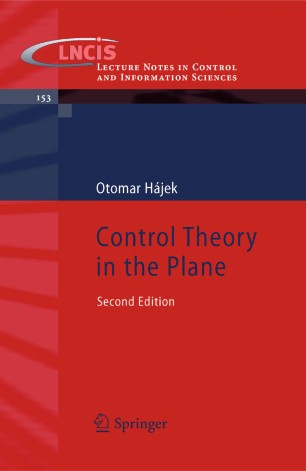 Control Theory in the Plane

An important scienti?c innovation rarely makes its way by gradually winning over and converting its opponents. . . What does happen is that its opponents die out and that the growing generation is familiarised with the idea from the beginning. (Max Planck, 1936) Humans have always attempted to in?uence their environment. Indeed, it seems likely that the understanding of aspects of this environment, and its control, whether by trial-and-error or by actual study and analysis, are crucial to the very process of civilisation. As an illustration, boats and ships were used even in pre-history for ?shing, tra- port, discovery, and trade. Small sailing craft are controlled primarily by working the main-sheet and rudder in conjunction. Once mastered, further experimentation (see e. g. the ?fth chapter of the Kon Tiki Expedition, with an entertaining account of the possible use of multiple movable centerboards on a sailing raft) led to a - sic change: keeled hulls and corresponding rigging, which made sailing against the wind possible. This was a relatively recent feature: even the far-voyaging Vikings relied primarily on beachable ships and recourse to oars. It was probably crucial in the west-to-east settlement of Oceania, from Taiwan to Easter Island. A 20th century development is the self-steering device, which regulates boat travel au- matically under mildly varying wind conditions; but this has had a much smaller social impact.