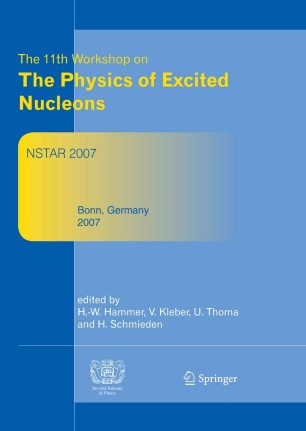 Proceedings of The 11th Workshop on The Physics of Excited Nucleons, 5–8 September 2007, Bonn, Germany

c Societ` a Italiana di Fisica / Springer-Verlag 2008 The 11th Workshop on The Physics of Excited Nucleons, NSTAR 2007, was held at the University of Bonn, Germany,fromSeptember5–8,2007.ItwasthelatestofaseriesofsuccessfulconferencesattheRensselaerPolytechnic Institute (1988), Florida State University (1994 and 2005), Je?erson Lab (1995 and 2000), INT Seattle (1996), GWU ? Washington (1997), ECT Trento (1998), Mainz (2001), Pittsburgh (2002) and the LPSC Grenoble (2004). A Baryon Resonance Analysis Group (BRAG) meeting immediately before the workshop focused especially on the physical meaning of bare and dressed scattering matrix singularities. A focus workshop on? photoproduction rounded o? the NSTAR 2007. The goal of NSTAR 2007 was to bring together experts on all areas of physics relevant to baryon spectroscopy, both in experiment and theory. Latest results were presented in 30 plenary talks and 34 parallel contributions, the proceedings of which are collected in this volume. The workshop was attended by 123 scientists of 41 universities and laboratories from 16 countries. Exciting new high-precision data were shown from facilities in Asia, the US and Europe, e.g. BES, BNL, COSY, ELSA, GRAAL, JLab, MAMI and LEPS. Large-acceptance detectors provide complete angular distributions in many reaction channels. Particular emphasis is put on the measurement of single and double polarisation observables such that many new polarization measurements can be expected in forthcoming meetings.