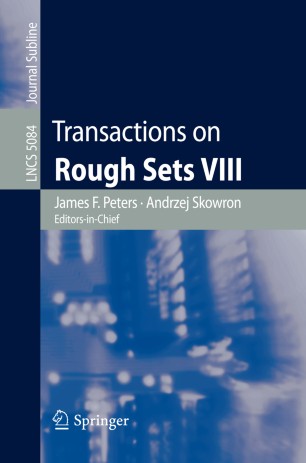 VolumeVIIIoftheTransactions on Rough Sets (TRS)containsa widespectrum of contributions to the theory and applications of rough sets. The pioneering work by Prof. Zdzis law Pawlak led to the introduction of knowledge representation systems during the early 1970s and the discovery of rough sets during the early 1980s. During his lifetime, he nurtured worldwide interest in approximation, approximate reasoning, and rough set theory and its 1 applications . Evidence of the in?uence of Prof. Pawlak’s work can be seen in the growth in the rough-set literature that now includes over 4000 publications 2 by more than 1900 authors in the rough set database as well as the growth and 3 maturity of the International Rough Set Society . This volume of TRS presents papers that introduce a number of new - vances in the foundations and applications of arti?cial intelligence, engineering, logic, mathematics, and science. These advances have signi?cant implications in a number of researchareas.In addition, it is evident from the papers included in this volume that roughset theoryand its application forma veryactiveresearch area worldwide. A total of 58 researchers from 11 countries are represented in this volume, namely, Australia, Canada, Chile, Germany, India, Poland, P.R. China, Oman, Spain, Sweden, and the USA. Evidence of the vigor,breadth, and depth of research in the theory and applications rough sets can be found in the articles in this volume. This volume contains 17 papers that explore a number of research streams.