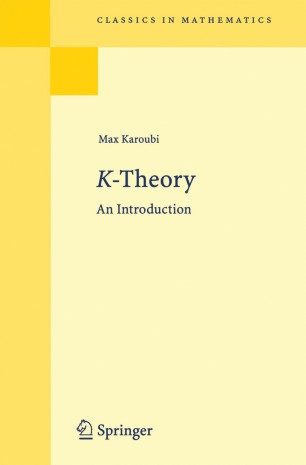 From the Preface: K-theory was introduced by A. Grothendieck in his formulation of the Riemann- Roch theorem. For each projective algebraic variety, Grothendieck constructed a group from the category of coherent algebraic sheaves, and showed that it had many nice properties. Atiyah and Hirzebruch  con­sidered a topological analog defined for any compact space X, a group K{X) constructed from the category of vector bundles on X. It is this ''topological K-theory" that this book will study.
Topological K-theory has become an important tool in topology. Using K- theory, Adams and Atiyah were able to give a simple proof that the only spheres which can be provided with H-space structures are S1, S3 and S7. Moreover, it is possible to derive a substantial part of stable homotopy theory from K-theory.
The purpose of this book is to provide advanced students and mathematicians in other fields with the fundamental material in this subject. In addition, several applications of the type described above are included. In general we have tried to make this book self-contained, beginning with elementary concepts wherever possible; however, we assume that the reader is familiar with the basic definitions of homotopy theory: homotopy classes of maps and homotopy groups.Thus this book might be regarded as a fairly self-contained introduction to a "generalized cohomology theory".

Max Karoubi received his PhD in mathematics (Doctorat d'Etat) from Paris University in 1967, while working in the CNRS (Centre National de la Recherche Scientifique), under the supervision of Henri Cartan and Alexander Grothendieck.  After his PhD, he took a position of "Maître de Conférences" at the University of Strasbourg until 1972. He was then nominated full Professor at the University of Paris 7-Denis Diderot until 2007. He is now an Emeritus Professor there.