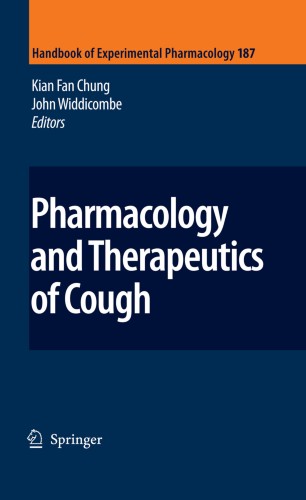 Pharmacology and Therapeutics of Cough

The last decade or so has seen remarkable advances in our knowledge of cough. This applies especially to its basic mechanisms: the types of airway sensors, the phar- cological receptors on their membranes, the brainstem organization of the ‘cough centre’, and the involvement of the cerebral cortex in the sensations and the vol- tary control of cough. With the exception of the last of these, nearly all the studies have been on experimental animals rather than humans, for obvious reasons. One group of experimental studies has particular relevance to human patients, and that is the demonstration of the sensitization of cough pathways both in the periphery and in the brainstem. Similar sensitizations have been shown for patients with chronic cough or who have been exposed to pollutants, and it is reasonable to suppose that this is the basis of their cough and that the underlying mechanisms are generally similar in humans and other species. Important advances are also being made in clinical cough research. For the three main causes of clinical cough, asthma, post-nasal drip syndrome, and gast- oesophageal re?ux disease, we are beginning to understand the pathological processes involved. There remains a diagnostically obdurate group of idiopathic chronic coughers, but even for them approaches are being devised to clarify und- lying mechanisms and to establish diagnoses. Perhaps surprisingly, the ?eld in which there has been the least spectacular - vance is the therapy of cough.