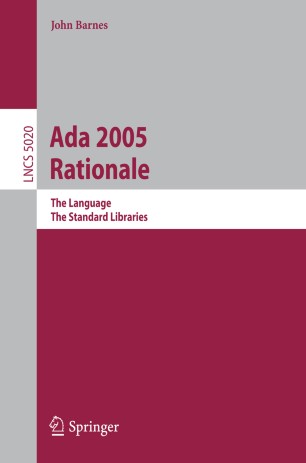 The Language, The Standard Libraries

Ada 2005 is the latest version of the International Standard for the programming language Ada. Formally, it is an Amendment of ISO/IEC 8652:1995 (E) rather than a completely new standard. The primary goals for the new version were to enhance its capabilities particularly in those areas where its reliability and predictability are of great value. Accordingly, a number of intriguing and attractive ideas have been included and implemented in a coherent manner as appropriate to the level of perfection necessary for the diligent maintenance of a language standard.

The Ada 2005 Rationale describes not only the changes from Ada 95 but also the reason for the changes. It starts with an introduction providing a general overview and this is followed by seven chapters focusing on OOP; access types; structure and visibility; tasking and real time; exceptions, generics, etc.; the predefined library; and containers. The book concludes with an epilogue largely concerned with compatibility issues.