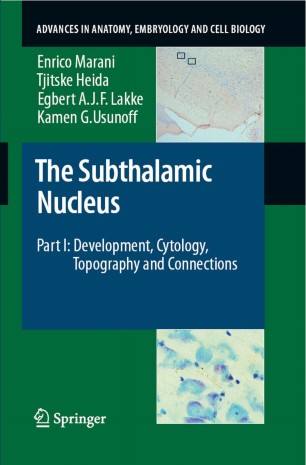 The Subthalamic Nucleus Part I: Development, Cytology, Topography and Connections

This monograph gives an overview of the STN. It treats the position of the STN in hemiballism, based on older and recent data. The cytology encompasses the neuronal types present in the STN in nearly all studied species and focuses on interneurons and the extent of their dendrites. Ultrastructural features are described for cat and baboon (F1, F2, Sr, LR1, LR2 boutons and d.c.v. terminals, together with vesicle containing dendrites), the cytochemistry is focused on receptors (dopamine, cannabinoid, opioid, glutamate, GABA, serotonin, and cholinergic-, purinergic ones) and calcium binding proteins and calcium channels. The development of the subthalamic nucleus from the subthalamic cell cord is given together with its developing connections. The topography of rat, cat, baboon and man is worked out as to cytology, sagittal borders, surrounding nuclei and tracts, and aging of the human STN. The connections of the STN are extensively elaborated on: cortical-, subthalamo-cortical-, pallidosubthalamic-, pedunculopontine-, raphe-, thalamic-, central grey-, and nigral connections. Emphasis is put on human connections. Recent nigro-subthalamic studies showed a contralateral projection. The role of the STN in the basal ganglia circuitry is described as to the direct, indirect and hyperdirect pathway. The change the STN undergoes in Parkinson’s disease in neuronal firing rate and firing pattern is demonstrated together with the possible mechanisms of deep brain stimulation. The results of in vitro measurements on dissociated cultured subthalamic neurons are presented. The preliminary effects of application of acetylcholine and high frequency stimulation are described. This part is preceded with studies concerning spontaneous activity, depolarizing and hyperpolarizing inputs, synaptic inputs, high frequency stimulation, and burst activity of STN cells. The last extensive part concerns STN cell models and simulation of neuronal networks. Single cell models (model of Otsuka and Terman/Rubin) are compared and the multi-compartment model of Gillies and Willshaw is explored. The globus pallidus externus-STN network as proposed by Terman is briefly described. The monograph finishes with a series of interpretations of the results.