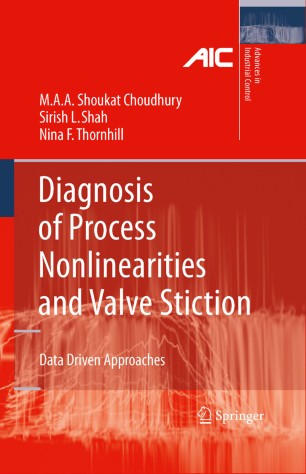 In this book, Higher Order Statistical (HOS) theory is used to develop indices for detecting and quantifying signal non-Gaussianity and nonlinearity. These indices, together with specific patterns in the mapping of process output and controller output are used to diagnose the causes of poor control loop performance.

Often valve stiction is the main cause of poor control performance. A generalized definition of valve stiction based on the investigation of real plant data is proposed. A simple data-driven model of valve stiction is developed. The model is simple, yet powerful enough to properly simulate the complex valve stiction phenomena. Both open and closed loop results have been presented and validated to show the capability of the model.

Conventional invasive methods such as the valve travel test can detect stiction easily. However, they are expensive, time consuming and tedious to use for examining thousands of valves in a typical process industry. A non-invasive method that can simultaneously detect and quantify control valve stiction is presented. The method requires only routine operating data from the process. Over a dozen industrial case studies have demonstrated the wide applicability and practicality of this method.

In chemical industrial practice, data are often compressed for archival purposes, using various techniques. Compression degrades data quality and induces nonlinearity in the data. The issues of data quality degradation and nonlinearity induction due to compression are investigated in this book. An automatic method for detection and quantification of the compression present in the archived data is discussed. Compelling and quantitative analyses have been recommended to end the practice of process data compression.

M. A. A. Shoukat Choudhury received his B. Sc. Engineering (Chemical) from Bangladesh University of Engineering and Technology (BUET), Dhaka, Bangladesh in 1996. He was awarded a gold medal for his outstanding results in B. Sc. Engineering. He obtained an M. Sc. Engineering (Chemical) in 1998 from the same university. He has completed his PhD degree in process control (Chemical Engineering) at the University of Alberta, Canada. For his outstanding research performance during the course of PhD program he has been awarded several awards such as University of Alberta PhD Dissertation Fellowship, Andrew Stewart Memorial Prize and ISA Educational Foundation Scholarship. He is the principal inventor of an internation patent (applied, 2005) on "Methods for Detection and Quantification of Control Valve Stiction". The methodologies and algorithms described in this patent are implemented and available in the commercial software ProcessDoctor from Matrikon Inc. His main research interests include diagnosis of poor control performance, stiction in control valves, data compression, control loop performance assessment and monitoring, and diagnosis of plant wide oscillations.

Sirish Shah received his B.Sc. degree in control engineering from Leeds University in 1971, a M.Sc. degree in automatic control from UMIST, Manchester in 1972, and a Ph.D. degree in process control (chemical engineering) from the University of Alberta in 1976. During 1977 he worked as a computer applications engineer at Esso Chemicals in Sarnia, Ontario. Since 1978 he has been with the University of Alberta, where currently holds the NSERC-Matrikon-ASRA Senior Industrial Research Chair in Computer Process Control. In 1989, he was the recipient of the Albright & Wilson Americas Award of the Canadian Society for Chemical Engineering in recognition of distinguished contributions to chemical engineering. He has held visiting appointments at Oxford University and Balliol College as a SERC fellow in 1985-86 and at Kumamoto University, Japan as a senior research fellow of the Japan Society for the Promotion of Science (JSPS) in 1994. The main area of his current research is process and performance monitoring, system identification and design and implementation of softsensors. He has recently co-authored a book titled, Performance Assessment of Control Loops: Theory and Applications. He has held consulting appointments with a wide variety of process Industries and has also taught many industrial courses.

“This monograph is aimed at researchers and practicing engineers interested in the diagnosis of closed-loop system performance. The goal is to present techniques for monitoring the performance of continuous processes in the chemical industry using process data. The material consolidates in one place some recent results concerned with the detection, diagnosis, and quantification of process nonlinearities.” (IEEE Control Systems Magazine, Vol. 29, October, 2009)