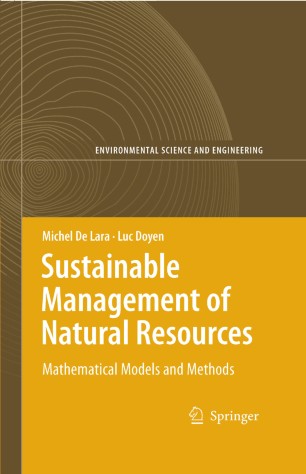 Nowadays, environmental issues including air and water pollution, climate change, overexploitation of marine ecosystems, exhaustion of fossil resources, conservation of biodiversity are receiving major attention from the public, stakeholders and scholars from the local to the planetary scales. It is now clearly recognized that human activities yield major ecological and envir- mental stresses with irreversible loss of species, destruction of habitat or c- matecatastrophesasthemostdramaticexamplesoftheire?ects.Infact,these anthropogenic activities impact not only the states and dynamics of natural resources and ecosystems but also alter human health, well-being, welfare and economic wealth since these resources are support features for human life. The numerous outputs furnished by nature include direct goods such as food, drugs, energy along with indirect services such as the carbon cycle, the water cycle and pollination, to cite but a few. Hence, the various ecological changes our world is undergoing draw into question our ability to sustain economic production, wealth and the evolution of technology by taking natural systems into account. The concept of “sustainable development” covers such concerns, although no universal consensus exists about this notion. Sustainable development - phasizes the need to organize and control the dynamics and the complex - teractions between man, production activities, and natural resources in order to promote their coexistence and their common evolution. It points out the importance of studying the interfaces between society and nature, and es- ciallythecouplingbetweeneconomicsandecology.Itinducesinterdisciplinary scienti?c research for the assessment, the conservation and the management of natural resources.