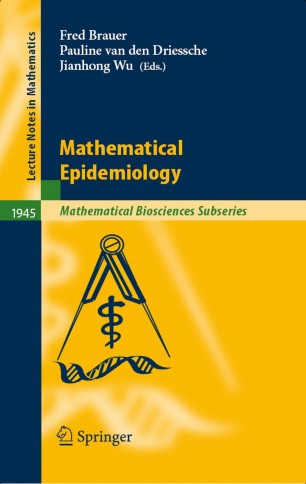 Based on lecture notes of two summer schools with a mixed audience from mathematical sciences, epidemiology and public health, this volume offers a comprehensive introduction to basic ideas and techniques in modeling infectious diseases, for the comparison of strategies to plan for an anticipated epidemic or pandemic, and to deal with a disease outbreak in real time. It covers detailed case studies for diseases including pandemic influenza, West Nile virus, and childhood diseases. Models for other diseases including Severe Acute Respiratory Syndrome, fox rabies, and sexually transmitted infections are included as applications. Its chapters are coherent and complementary independent units. In order to accustom students to look at the current literature and to experience different perspectives, no attempt has been made to achieve united writing style or unified notation.

Notes on some mathematical background (calculus, matrix algebra, differential equations, and probability) have been prepared and may be downloaded at the web site of the Centre for Disease Modeling (www.cdm.yorku.ca ).

Fred Brauer is a professor emeritus at the University of Wisconsin – Madison, where he taught from 1960 to 1999, and has been an honorary professor at the University of British Columbia since 1997. He is the author or co-author of 115 papers on differential equations, mathematical population biology, and mathematical epidemiology as well as 10 books including undergraduate texts and a book on models in population biology and epidemiology jointly with Carlos Castillo – Chavez.

Pauline van den Driessche is a professor emerita in the Department of Mathematics and Statistics and an adjunct professor in the Department of Computer Science at the University of Victoria. Her research interests include mathematical biology, especially epidemiology, and matrix analysis. Recently she was awarded the 2007 Krieger – Nelson prize by the Canadian Mathematical Society, and gave the Olga Taussky Todd lecture at the International Conference in Industrial and Applied Mathematics in July 2007.

Jianhong Wu is a professor and a Senior Canada Research Chair in Applied Mathematics at York University. He is the author or coauthor of over 200 peer-reviewed publications and six monographs in the areas of nonlinear dynamical systems, delay differential equations, mathematical biology and epidemiology, neural networks, and pattern formation and recognition. He is the recipient of the Canadian Industrial and Applied Mathematics Research Prize (2003), the Alexander van Humboldt Fellowship (1996), the Paul Erdos Visiting Professorship (2000), and Cheung Kong/YangZi River Lecture Professorship (2006).

"This book presents a … complete picture of mathematical epidemiology from the point of view of the applied mathematics community. … The stated goal of the book is to ‘persuade epidemiologists and public health workers that mathematical modelling can be of use to them.’ … There seems to be material for almost every kind of student, with a minimal background in calculus and probability theory … . A real life lesson that we cannot neglect." (Hernán G. Solari, Mathematical Reviews, Issue 2009 k)