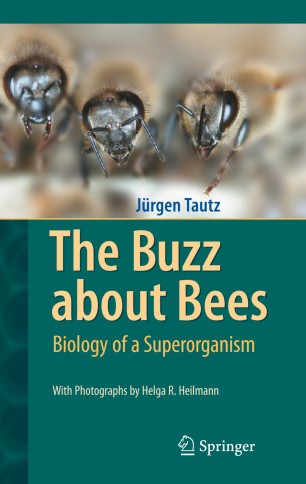 The Buzz about Bees

Biology of a Superorganism

“Whereas bee colonies were once seen as perfect societies of selfless workers and drones ruled by a queen, Tautz presents them as a self-organized, complex adaptive system that he considers “a mammal in many bodies”. This comprehensive introduction to honeybee biology (originally published as Phänomen Honigbiene) explores such topics as how bees obtain and communicate information about flowers, “whole-animal gametes”, and the comb’s contributions to the sociophysiology of the colony. The author has been honored for making research accessible to the public, and his lucid text will reward lay readers, apiarists, students, and professional biologists alike. The book is profusely illustrated with Heilmann’s spectacular photos, which capture the full range of bee activities—including some, such as the living chains formed where combs are being built or repaired, whose function remains unknown.” (SCIENCE, Vol. 322, 19 December 2008)

“With spectacularly beautiful colour photographs and an easy understandable text The Buzz about Bees tells the story of honeybees in a new perspective. Based on the latest data, notably from his own research group, Jürgen Tautz provides a wonderful insight into the realms of bees. In contrast to the view of bee colonies as perfect societies of selfless individuals ruled by a queen, Tautz introduces them as a “superorganism”, a self organizing and complex adaptive system based on a network of communication; a fascinating result of evolution – a mammal in several bodies. The entire range of astonishing bee activities is described. Remarkable action photographs never shown before present bees busy with cell cleaning, caring for the brood, serving in the queen’s court, visiting flowers, receiving nectar, producing honey, comb building, entrance guarding, heating and cooling. Spotlights include bees grooming, swarming, fighting, telephoning, sleeping and communicating by high-toned beeping, scents and dances.”