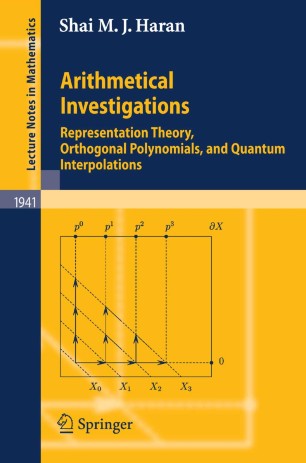 In this volume the author further develops his philosophy of quantum interpolation between the real numbers and the p-adic numbers. The p-adic numbers contain the p-adic integers Zp which are the inverse limit of the finite rings Z/pn. This gives rise to a tree, and probability measures w on Zp correspond to Markov chains on this tree. From the tree structure one obtains special basis for the Hilbert space L2(Zp,w). The real analogue of the p-adic integers is the interval [-1,1], and a probability measure w on it gives rise to a special basis for L2([-1,1],w) - the orthogonal polynomials, and to a Markov chain on "finite approximations" of [-1,1]. For special (gamma and beta) measures there is a "quantum" or "q-analogue" Markov chain, and a special basis, that within certain limits yield the real and the p-adic theories. This idea can be generalized variously. In representation theory, it is the quantum general linear group GLn(q)that interpolates between the p-adic group GLn(Zp), and between its real (and complex) analogue -the orthogonal On (and unitary Un )groups. There is a similar quantum interpolation between the real and p-adic Fourier transform and between the real and p-adic (local unramified part of) Tate thesis, and Weil explicit sums.