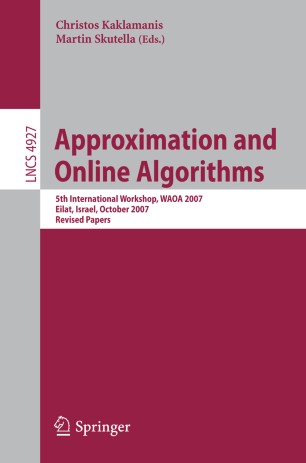 The Fifth Workshop on Approximation and Online Algorithms (WAOA 2007) focused on the design and analysis of algorithms for online and computationally hard problems. Both kinds of problems have a large number of applications from a variety of ?elds. WAOA 2007 took place in Eilat, Israel, during October 11–12, 2007. The workshop was part of the ALGO 2007 event that also hosted ESA 2007, and PEGG 2007. The previous WAOA workshops were held in Budapest (2003), Rome (2004), Palma de Mallorca (2005) and Zurich (2006). The proceedings of these previous WAOA workshops have appeared as LNCS volumes 2909, 3351, 3879 and 4368, respectively. Topics of interest for WAOA 2007 were: algorithmic game theory, appro- mation classes, coloring and partitioning, competitive analysis, computational ?nance, cuts and connectivity, geometric problems, inapproximability results, mechanism design, network design, packing and covering, paradigms for design and analysis of approximation and online algorithms, randomization techniques, real-world applications, and scheduling problems. In response to the call for - pers, we received 56 submissions. Each submission was reviewed by at least three referees, and the vast majority by at least four referees. The submissions were mainly judged on originality, technical quality, and relevance to the topics of the conference. Based on the reviews, the Program Committee selected 22 papers. We are grateful to Andrei Voronkov for providing the EasyChair conference system which was used to manage the electronic submissions, the review process, and the electronic PC meeting. It made our task much easier.