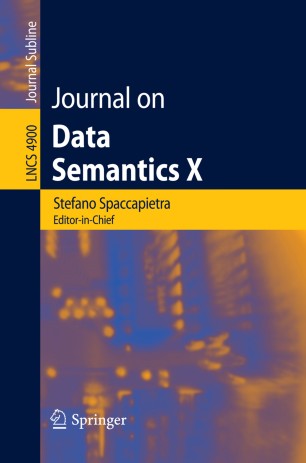 • Web semantics and semi-structured data • Semantic caching • Data warehousing and semantic data mining • Spatial, temporal, multimedia and multimodal semantics • Semantics in data visualization • Semantic services for mobile users • Supporting tools • Applications of semantic-driven approaches These topics are to be understood as specifically related to semantic issues. Contributions submitted to the journal and dealing with semantics of data will be considered even if they are not from the topics in the list. While the physical appearance of the journal issues is like the books from the we- known Springer LNCS series, the mode of operation is that of a journal. Contributions can be freely submitted by authors and are reviewed by the Editorial Board. Contributions may also be invited, and nevertheless carefully reviewed, as in the case for issues that contain extended versions of best papers from major conferences addressing data semantics issues. Special issues, focusing on a specific topic, are coordinated by guest editors once the proposal for a special issue is accepted by the Editorial Board. Finally, it is also possible that a journal issue be devoted to a single text. The Editorial Board comprises an Editor-in-Chief (with overall responsibility), a Co-editor-in-Chief, and several members. The Editor-in-Chief has a four-year mandate. Members of the board have a three-year mandate. Mandates are renewable and new members may be elected anytime.