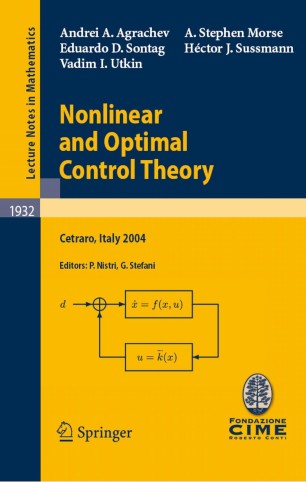 The lectures gathered in this volume present some of the different aspects of Mathematical Control Theory. Adopting the point of view of Geometric Control Theory and of Nonlinear Control Theory, the lectures focus on some aspects of the Optimization and Control of nonlinear, not necessarily smooth, dynamical systems. Specifically, three of the five lectures discuss respectively: logic-based switching control, sliding mode control and the input to the state stability paradigm for the control and stability of nonlinear systems. The remaining two lectures are devoted to Optimal Control: one investigates the connections between Optimal Control Theory, Dynamical Systems and Differential Geometry, while the second presents a very general version, in a non-smooth context, of the Pontryagin Maximum Principle. The arguments of the whole volume are self-contained and are directed to everyone working in Control Theory. They offer a sound presentation of the methods employed in the control and optimization of nonlinear dynamical systems.