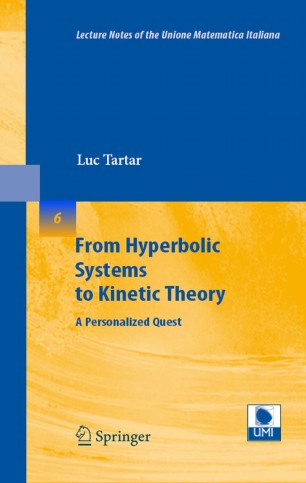 From Hyperbolic Systems to Kinetic Theory

Equations of state are not always effective in continuum mechanics. Maxwell and Boltzmann created a kinetic theory of gases, using classical mechanics. How could they derive the irreversible Boltzmann equation from a reversible Hamiltonian framework? By using probabilities, which destroy physical reality! Forces at distance are non-physical as we know from Poincaré's theory of relativity. Yet Maxwell and Boltzmann only used trajectories like hyperbolas, reasonable for rarefied gases, but wrong without bound trajectories if the "mean free path between collisions" tends to 0. Tartar relies on his H-measures, a tool created for homogenization, to explain some of the weaknesses, e.g. from quantum mechanics: there are no "particles", so the Boltzmann equation and the second principle, can not apply. He examines modes used by energy, proves which equation governs each mode, and conjectures that the result will not look like the Boltzmann equation, and there will be more modes than those indexed by velocity!