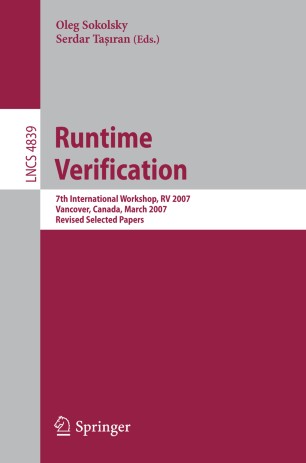 Runtime veri?cation is a recent direction in formal methods research, which is complementary to such well-established formal veri?cation methods as model checking. Research in runtime veri?cation deals with formal languages suitable for expressing system properties that are checkable at run time; algorithms for checking of formal properties over an execution trace; low-overhead means of extracting information from the running system that is su?cient for checking of the property. Applications of runtime veri?cation technology include po- deployment monitoring of system correctness and performance; construction of formally speci?ed test oracles; collection of statistics about system behavior, among others. The Workshop on Runtime Veri?cation was started in 2001 and has been held annually since then. The workshop was co-located with the Conference on Computer-Aided Veri?cation (CAV) in 2001–2003 and 2005–2006;and with the European Joint Conferences on Theory and Practice of Software (ETAPS) in 2004. In 2007, the workshop was held on March 13, 2007 in Vancouver, British Columbia, Canada, co-located to the Conference on Aspect-Oriented Software Development (AOSD) in order to explore the emerging connections between the two communities.