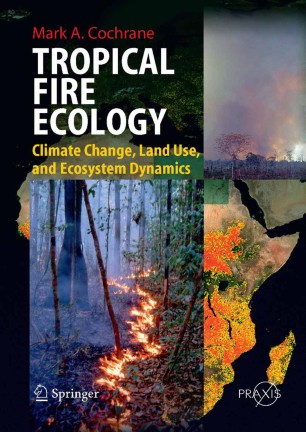 The tropics are home to most of the world’s biodiversity and are currently the frontier for human settlement. Tropical ecosystems are being converted to agricultural and other land uses at unprecedented rates. Land conversion and maintenance almost always rely on fire and, because of this, fire is now more prevalent in the tropics than anywhere else on Earth. Despite pervasive fire, human settlement and threatened biodiversity, there is little comprehensive information available on fire and its effects in tropical ecosystems.

Tropical deforestation, especially in rainforests, has been widely documented for many years. Forests are cut down and allowed to dry before being burned to remove biomass and release nutrients to grow crops. However, fires do not always stop at the borders of cleared forests. Tremendously damaging fires are increasingly spreading into forests that were never evolutionarily prepared for wild fires. The largest fires on the planet in recent decades have occurred in tropical forests and burned millions of hectares in several countries.

The numerous ecosystems of the tropics have differing levels of fire resistance, resilience or dependence. At present, there is little appreciation of the seriousness of the wild fire situation in tropical rainforests but there is even less understanding of the role that fire plays in the ecology of many fire adapted tropical ecosystems, such as savannas, grasslands and other forest types.