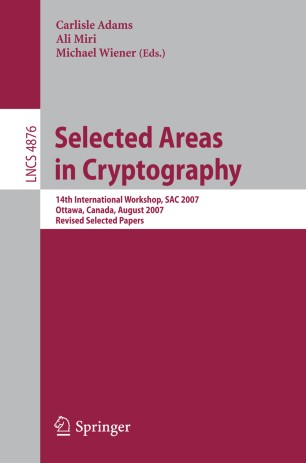 SAC 2007 was the 14th in a series of annual workshops on Selected Areas in Cryptography. This is the ?rst time this workshop was held at the University of Ottawa. Previous workshops were held at Queen’s University in Kingston (1994, 1996, 1998, 1999, and 2005), Carleton University in Ottawa (1995, 1997, and 2003), University of Waterloo (2000 and 2004), Fields Institute in Toronto (2001), Memorial University of Newfoundland in St. Johns (2002), and Conc- dia University in Montreal (2006). The intent of the workshop is to provide a stimulating atmosphere where researchersin cryptology can present and discuss new work on selected areas of current interest. The themes for SAC 2007 were: – Design and analysis of symmetric key cryptosystems – Primitives for symmetric key cryptography, including block and stream ciphers, hash functions, and MAC algorithms – E?cient implementations of symmetric and public key algorithms – Innovative cryptographic defenses against malicious software A total of 73 papers were submitted to SAC 2007. Of these, one was wi- drawn by the authors, and 25 were accepted by the Program Committee for presentation at the workshop. In addition to these presentations, we were for- nate to have two invited speakers: – Dan Bernstein: “Edwards Coordinates for Elliptic Curves” – MotiYung:“CryptographyandVirologyInter-Relationships. ”Thistalkwas designated the Sta?ord Tavares Lecture. We are grateful to the Program Committee and the many external reviewers for their hard work and expertise in selecting the program.