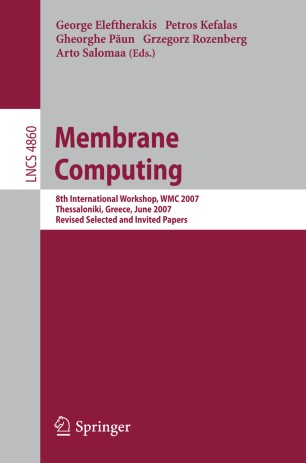 This volume contains a selection of papers presented at the Eighth Workshop on Membrane Computing, WMC8, which took place in Thessaloniki, Greece, during June 25–28, 2008. The ?rst three workshops on membrane computing were organized in Curtea de Arge¸ s, Romania – they took place in August 2000 (with the proceedings published in Lecture Notes in Computer Science,volume 2235), in August 2001 (with a selection of papers published as a special issue of Fundamenta Informaticae, volume 49, numbers 1–3, 2002), and in August 2002 (with the proceedings published in Lecture Notes in Computer Science, volume 2597). The next four workshops were organized in Tarragona, Spain, in July 2003, in Milan, Italy, in June 2004, in Vienna, Austria, in July 2005, and in Leiden, The Netherlands, in July 2006, with the proceedings published as volumes 2933, 3365, 3850, and 4361, respectively, of Lecture Notes in Computer Science. The 2007 edition of WMC was organized by the South-East European - search Centre in Thessaloniki, under the auspices of the European Molecular Computing Consortium (EMCC). Special attention was paid to the interaction of membrane computing with biology and computer science, focusing on the - ological roots of membrane computing, on applications of membrane computing in biology and medicine, and on possible electronically based implementations. The pre-proceedings of WMC8 were published by the South-East European Research Centre, Thessaloniki, and they were available during the workshop. Each paper was refereed by two members of the Program Committee.