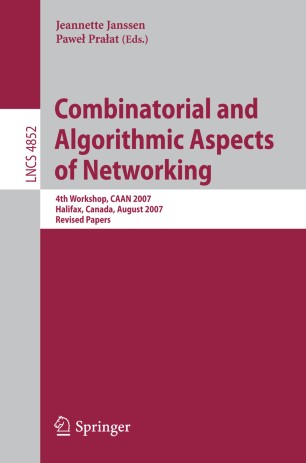 CAAN: Workshop on Combinatorial and Algorithmic Aspects of Networking

Combinatorial and Algorithmic Aspects of Networking

The advent of the Internet has opened up a wealth of applications, but also given rise to a host of new problems. Many of those problems have led to - citing new research directions in mathematics and theoretical computer science, especially in the areas of combinatorics and algorithms. The Fourth Workshop on Combinatorial and Algorithmic Aspects of Networking (CAAN 2007) was organized to be a place where the latest research developments on all aspects of networking could be presented. The topics covered were diverse, with talks on strategies for searching in networks, for cleaning networks of unwanted - truders, on di?erent routing strategies, and on scheduling and load balancing. The workshop started with an invited lecture by Peter Winkler of Dartmouth College, who gave a general talk on a topic related to probability, a concept central to network modeling and managing. The afternoon opened with a short invited talk by Alejandro Lop ´ ez-Ortiz, who gave an overview of various issues in designing resilient backbone networks. CAAN 2007 took place on August 14, 2007, at Dalhousie University in Halifax, Nova Scotia, Canada, co-located with the Workshop on Algorithms and Data Structures (WADS 2007). Three previous CAAN workshops were held in Chester, UK (CAAN 2006), Waterloo, Ontario, Canada (CAAN 2005), and in Ban?, Alberta, Canada (CAAN 2004), respectively.