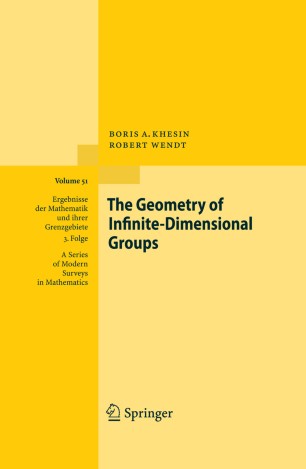 The Geometry of Infinite-Dimensional Groups

This monograph gives an overview of various classes of infinite-dimensional Lie groups and their applications in Hamiltonian mechanics, fluid dynamics, integrable systems, gauge theory, and complex geometry. While infinite-dimensional groups often exhibit very peculiar features, this book describes unifying geometric ideas of the theory and gives numerous illustrations and examples, ranging from the classification of the Virasoro coadjoint orbits to knot theory, from optimal mass transport to moduli spaces of flat connections on surfaces.

The text includes many exercises and open questions, and it is accessible to both students and researchers in Lie theory, geometry, and Hamiltonian systems.

B.Khesin's areas of research are infinite-dimensional Lie groups, integrable systems, Poisson geometry, and topological hydrodynamics. Together with Vladimir Arnold he is the author of the monograph on "Topological methods in hydrodynamics", which has become a standard reference in mathematical fluid dynamics. He was a Sloan research fellow in 1997-1999 and a Clay Mathematics Institute book fellow in 2006-2007, as well as an Andre-Aizenstadt prize recepient in 1998.

R.Wendt's fields of research include the geometry and representation theory of infinite dimensional Lie groups and algebras, related geometric structures, and mathematical physics. He is also interested in mathematical finance and 'real world' applications of financial modelling

"The book under review is a welcome addition to the literature on infinite-dimensional Lie groups. … the present monograph is to ‘present the unifying ideas of the theory by concentrating on specific types and examples of infinite-dimensional Lie groups’, in the authors’ own words. The groups discussed here can be divided roughly into three classes … . The main part of the book consists in the treatment of these groups, including their geometry, their coad-joint orbits, and their relationship to the Hamiltonian structures." (Daniel Beltita, Mathematical Reviews, Issue 2009 k)

“The book itself starts with (possibly infinite-dimensional) Lie groups and their algebras, defines the adjoint and co-adjoint representations, and then proceeds to central extensions … . there are ample references to the enormous bibliography, which contains 393 listings, so the interested reader can easily delve further if he or she wishes. The book may be most useful as a way to get an overview of the subject … or as a window through which to glimpse any one of the subjects … .” (David G. Ebin, Bulletin of the American Mathematical Society, January, 2011)