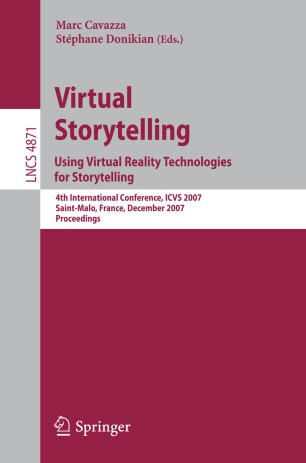 In September 2001 the First International Conference on Virtual Storytelling was organized in Avignon, France. This was the ?rst international scienti?c event entirely devoted to the new discipline that links the ancient human arts of storytelling to the latest technologies of the virtual reality era. Then, Virtual Storytelling 2003 was held during November 20–21, 2003, in Toulouse, France, and Virtual Storytelling 2005 was held during November 30–December 2, 2005, in Strasbourg, France. Since autumn 2003, there has been a strong collaboration between the two major virtual/digital storytelling conference series in Europe: Virtual Sto- telling and TIDSE (Technologies for Interactive Digital Storytelling and Ent- tainment).ThustheconferencechairsofTIDSEandVirtualStorytellingdecided to establish a 2-year turnover for both conferences. Narratives have evolved from their early role in human knowledge tra- mission into the main content of cultural production. With the advent of mass media, they are now at the heart of one of the world’s largest industries.