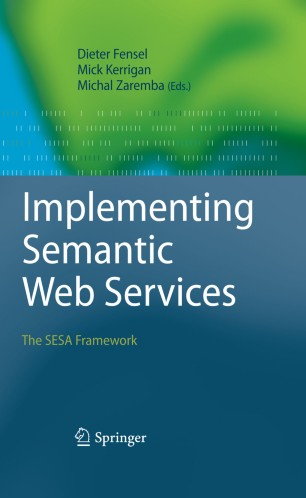 Service-oriented computing has become one of the predominant factors in IT research and development efforts over the last few years. In spite of several standardization efforts that advanced from research labs into industrial-strength technologies and tools, there is still much human effort required in the process of finding and executing Web services.

Here, Dieter Fensel and his team lay the foundation for understanding the Semantic Web Services infrastructure, aimed at eliminating human intervention and thus allowing for seamless integration of information systems. They focus on the currently most advanced SWS infrastructure, namely SESA and related work such as the Web Services Execution Environment (WSMX) activities and the Semantic Execution Environment (OASIS SEE TC) standardization effort. Their book is divided into four parts: Part I provides an introduction to the field and its history, covering basic Web technologies and the state of research and standardization in the Semantic Web field. Part II presents the SESA architecture. The authors detail its building blocks and show how they are consolidated into a coherent software architecture that can be used as a blueprint for implementation. Part III gives more insight into middleware services, describing the necessary conceptual functionality that is imposed on the architecture through the basic principles. Each such functionality is realized using a number of so-called middleware services. Finally, Part IV shows how the SESA architecture can be applied to real-world scenarios, and provides an overview of compatible and related systems.

Mick Kerrigan is a PhD researcher in the Digital Enterprise Research Institute (DERI) located in Leopold-Franz University Innsbruck, Austria. Over the last year he has been primarily involved in the WSMX working group focusing on front-end tools for Semantic Web Services. The primary output of his work has been the Web Service Modeling Toolkit, a collection of tools for Semantic Web Services, focusing on tools for creating and managing WSMO descriptions. Mick is also a contributor to and the secretary of the OASIS Semantic Execution Environment technical committee (SEE TC).