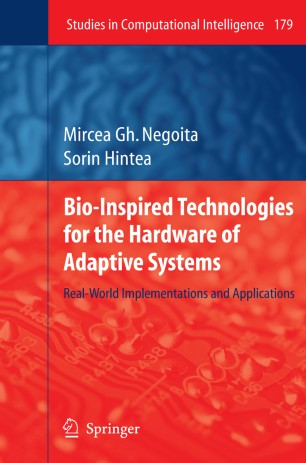 Bio-Inspired Technologies for the Hardware of Adaptive Systems

Evolvable Hardware (EHW) has emerged as a novel and highly diversified bio- inspired technology and paradigm supporting the design, analysis and deployment of the high performance intelligent systems. EHW is a special case of the adaptive hardware, namely being strongly related to the Adaptive Systems (AS) and the Adaptive Hardware (AH). The discipline of EHW brings together hardware implementation of the main technologies of CI including fuzzy sets, neural networks, and evolutionary optimization. EHW systems also cover novel areas as Artificial Immune Systems and DNA computing. The strength of EHW hinges on the synergy between these technologies supported by the advanced analogue and digital programmable circuits. The advanced programmable circuits confer the suitable hardware environment for a CI implementation from day to day more close to the intelligence of a human being.

The authoritative coverage of the area is performed through a clear and well-organized way of presenting the fundamentals of key methods. The book presents in a thorough way almost an entire range of EHW/AH intelligent systems, and what is very important for practitioners, it also provides several real-life, working, implementations of EHW/AH systems. As a result the book can serve as a valuable introduction to EHW/AH intelligent systems, and as a guide of how to use them for solving real problems. As such it has a good chance of becoming one of the most cited references in the area.