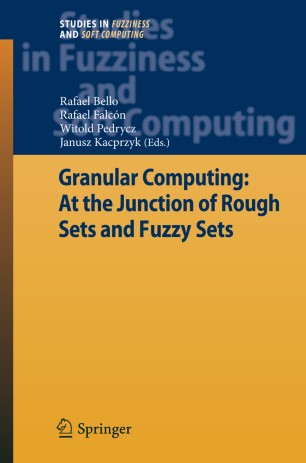 Granular Computing: At the Junction of Rough Sets and Fuzzy Sets

Part of the Studies in Fuzziness and Soft Computing book series (STUDFUZZ, volume 224)

Since their very inception, both fuzzy and rough set theories have earned a sound, well-deserved reputation owing to their intrinsic capabilities to model uncertainty coming from the real world. The increasing amount of investigations on both subjects reported every year in the literature vouches for the dynamics of the area and its rapid advancements.

In the last few years the widespread utilization of fuzzy and rough sets as granulation sources has contributed to lay both methodologies in a privileged position within Granular Computing, thus giving rise to a sort a modeling which is far closer to the way human beings perceive their environment – via granulated knowledge.

This volume is a compilation of the best papers presented at the First International Symposium on Fuzzy and Rough Sets (ISFUROS 2006) held in Santa Clara, Cuba. You will therefore find valuable contributions both in the theoretical field as in several application domains such as intelligent control, data analysis, decision making and machine learning, just to name a few. Together, they will catch you up with the huge potential of the aforementioned methodologies.