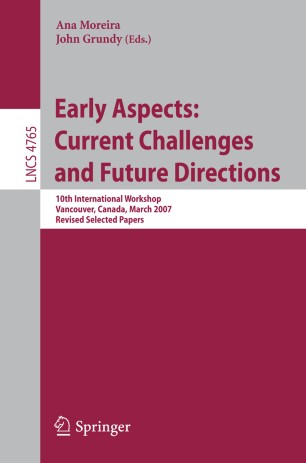 Celebrating Five Years of Early Aspects The early aspects community had its origins in the “Early Aspects: Requirements En- neering and Architecture Design” workshop organized during the first international c- ference on Aspect-Oriented Software Development (AOSD), in March 2002. Since then, the early aspects community has grown rapidly. At the time this project started, the Early Aspects Steering Committee (www. early-aspects. net) had organized nine editions of the Early Aspects workshop in conferences such as AOSD OOPSLA, ICSE and SPLC and edited two special issues in international journals. Workshop attendance has exceeded 200, and from these more than 60% were different individuals. This number corresponds to just over 20 participants per workshop, despite the fact that participation was allowed only to authors of accepted papers or invited researchers. However, the early aspects community is much larger than that. A considerable n- ber of papers have been published regularly in journals, books and conferences where the early aspects workshop has not yet been organized. The number and range of subm- sions to the workshop series have demonstrated that the field has a solid base of conti- ous research being done by established groups around the world. The early-aspects community is now self-sustaining and continuously expanding. Therefore, we felt that the fifth anniversary of the first early aspects workshop was an appropriate juncture to upgrade the autonomous standing of the community by providing it with its own formal publication.