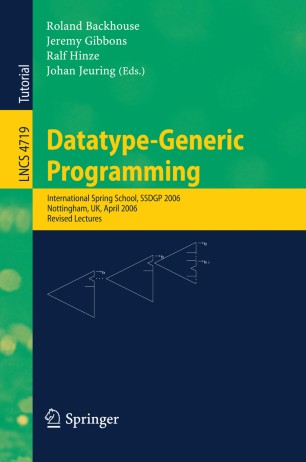 A leitmotif in the evolution of programming paradigms has been the level and extent of parametrisation that is facilitated — the so-called genericity of the paradigm. The sorts of parameters that can be envisaged in a programming language range from simple values, like integers and ?oating-point numbers, through structured values, types and classes, to kinds (the type of types and/or classes).Datatype-generic programming is about parametrising programsby the structure of the data that they manipulate. Toappreciatethe importanceofdatatypegenericity,oneneedlooknofurther than the internet. The internet is a massive repository of structured data, but the structure is rarely exploited. For example, compression of data can be much more e?ective if its structure is known, but most compression algorithms regard the input data as simply a string of bits, and take no account of its internal organisation. Datatype-genericprogrammingisaboutexploitingthestructureofdatawhen it is relevant and ignoring it when it is not. Programming languages most c- monly used at the present time do not provide e?ective mechanisms for do- menting and implementing datatype genericity. This volume is a contribution towards improving the state of the art. The emergence of datatype genericity can be traced back to the late 1980s.