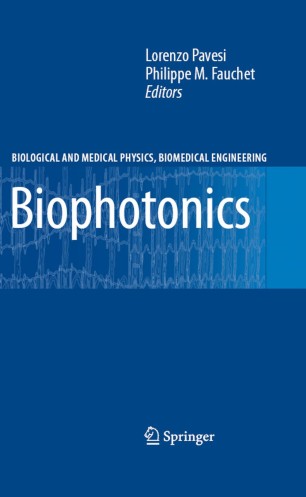 More profound understanding of the nature of light and light-matter interactions in biology has enabled many applications in the biology and medical fields. So a new discipline is born, namely biophotonics. The aim of this book is to review the current state-of-the-art of the field by means of authoritative chapters written by the world leaders of the respective fields. Biosensors, biochips, optical tomography, optical microsurgery, photodynamics therapy, bioactivation of gene, photobiology of skin, and nanobiophotonics are each introduced and recent advances presented. This book will be useful not only to physicians, biologists, physicists, chemists, materials scientists, and engineers but also to graduate students who are interested in these rapidly developing fields.

Lorenzo Pavesi is Professor of experimental physics at the university of Trento (Italy). Born the 21st of november 1961, he received the phd in physics in 1990 at the ecole polytechnique federale of lausanne (switzerland). in 1990 he became assistant professor, an associate professor in 1999 and full professor in 2002 at the university of Trento. He founded the research activity in semiconductor optoelectronics at the university of Trento and started several laboratories of optical spectroscopy, growth and advanced treatment of materials. During the last years, he concentrated on Si-based photonics, of which is one the leading experts worldwide. Recently his interested moved to nanoscience including nanobiotechnology and to the convergence of the nano- with the microtechnologies.

Professor Philippe Fauchet is a Distinguished Professor of Electrical and Computer Engineering at the University of Rochester (USA), where he is also Professor of Optics, Biomedical Engineering, and Materials Science. He received his Ph.D. in Applied Physics from Stanford University in 1984 and taught at Stanford and Princeton Universities before joining the University of Rochester in 1990. His research areas are in nanoscience and nanotechnology with silicon, optical and electrical biosensors, electroluminescent materials and devices, and optical diagnostics. In 1998, he founded the Center for Future Health, a multidisciplinary center involving scientists, engineers, physicians, nurses, and social scientist working together to develop devices and systems that can keep people healthy. He is a Fellow of the Optical Society of America, the American Physical Society, and the Institute of Electrical and Electronic Engineering.

“All ideas are introduced on a level that can be easily grasped by either a physicist or a biologist – starting from advanced undergraduates through to post-doctoral researchers. … Biophotonics is highly recommended to anyone from graduate students in their final years at university to academics, providing a detailed introduction … in key areas of biophotonics. … provide a solid base for building up a curriculum for a course in biophotonics, biophysics or related subjects and to provide a key reading material for such subjects.” (Oleg Kolosov, Contemporary Physics, Vol. 51 (4), 2010)
Buy options