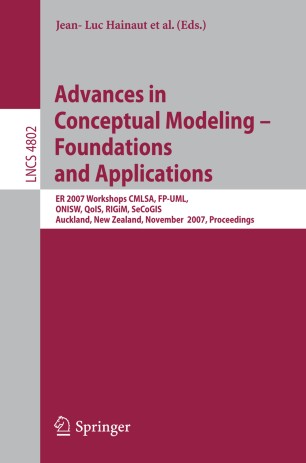 The 26th International Conference on Conceptual Modeling in Auckland, New Zealand, hosted six workshops which allowed participants to focus their p- sentations and discussions on advanced topics that cannot easily ?t the general conference scope. Thirteen good quality proposals were received and nine were selected. Due to the similarity of their scope, two pairs were suggested to merge, leading to seven proposals. One workshop attracted fewer submissions than expected, so that its selected papers were integrated into the conference. Finally, six wo- shopswerekept.Interestingly,fourofthem(FP-UML,ONISW,QoIS,SeCoGIS) were a sequel of workshops that were held in the last few years, while two were new (CMLSA, RIGiM), exhibiting both the maturity and the innovation of the workshops. Following the call for papers, we received 114 complete submissions, from which 40 quality papers wereselected, giving an acceptance rate of 35% (a fairly standard score for workshops). The following six workshops were organized: – ConceptualModellingforLifeSciencesApplications (CMLSA2007),chaired by Yi-Ping Phoebe Chen and Sven Hartmann. This workshopaddressed the speci?c challenges posed by the large data volumes, the complexity and the data and software heterogeneity involved by life science applications. – Foundations and Practices of UML (FP-UML 2007), chaired by Juan Trujillo and Je?rey Parsons. The third edition of this workshop gathered researchers and practitioners on topics related to data warehouses, security, model transformation, state diagrams development and model quality.