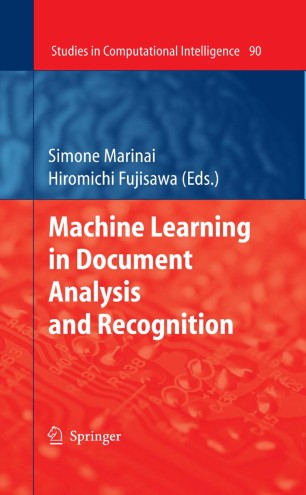 The objective of Document Analysis and Recognition (DAR) is to recognize the text and graphicalcomponents of a document and to extract information. With ?rst papers dating back to the 1960’s, DAR is a mature but still gr- ing research?eld with consolidated and known techniques. Optical Character Recognition (OCR) engines are some of the most widely recognized pr- ucts of the research in this ?eld, while broader DAR techniques are nowadays studied and applied to other industrial and o?ce automation systems. In the machine learning community, one of the most widely known - search problems addressed in DAR is recognition of unconstrained handwr- ten characters which has been frequently used in the past as a benchmark for evaluating machine learning algorithms, especially supervised classi?ers. However, developing a DAR system is a complex engineering task that involves the integration of multiple techniques into an organic framework. A reader may feel that the use of machine learning algorithms is not approp- ate for other DAR tasks than character recognition. On the contrary, such algorithms have been massively used for nearly all the tasks in DAR. With large emphasis being devoted to character recognition and word recognition, other tasks such as pre-processing, layout analysis, character segmentation, and signature veri?cation have also bene?ted much from machine learning algorithms.