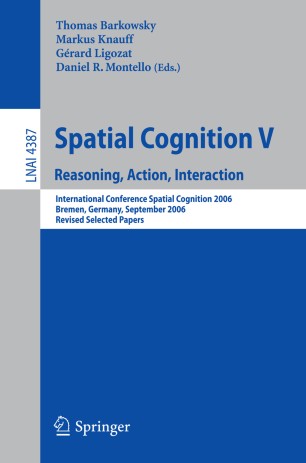 This is the fifth volume in a series of book publications featuring basic interdisciplinary research in spatial cognition. The study of spatial cognition is the study of knowledge about spatial properties of objects and events in the world. Spatial properties include location, size, distance, direction, separation and connection, shape, pattern, and so on. Cognition is about the structures and processes of knowledge: its acquisition, storage, retrieval, manipulation, and use by humans, nonhuman animals, and machines. Broadly construed, cognitive activities include sensation and perception, thinking, attention, imagery, attitudes, memory, learning, language, and reasoning and problem-solving; the interaction of these activities with motoric (body movement) and affective (emotional) processing is recognized as critically important, as well. Cognition is typically considered to make up much of the activity of the mind. But though the mind is an expression of the structures and processes of the brain and nervous system, it is also an expression of an organism or agent with a physical body that typically exists in a physical and socio-cultural world. Researchers study spatial cognition for several reasons. Spatial cognition plays important roles in most of the domains of knowledge and behavior of sentient beings, including activities associated with biological survival, social interaction, cultural practice, and economic exchange. Attempts to describe, predict, and explain the basic components of spatial cognition and their interrelationships stimulate a host of interesting basic questions about how important parts of reality work.